Explorations (I): “Breath & No Breath”

After a nine month hiatus, I’ve decided to try a fresh approach, an approach which will bring together an exploration of the processes I engage in when working in the studio or at my desk. If I dig deeply enough into what I’m thinking and making, and give it language, my hope is that I’ll become more articulate about what I know intuitively: that poem and painting (drawing, collage, print), though materially different, rise from the same source and that by engaging with one, the other also evolves. 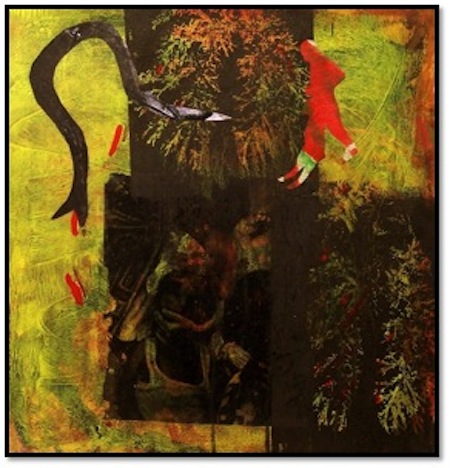 I’ve been working on a series of same-size collages, paintings, and mixed media pieces, for a couple of years now.  The papers, a thick, ivory Legion rag—about 40 sheets—were torn ends, “scraps”, from a print studio, trimmings that would likely have been  discarded.  I’ve worked on these pieces, put them away, taken them out again, several times.  I pin them to the studio wall for a week or two without touching them, only looking.  I let the images sink in.  I let this happen as Emily Dickinson would describe it:  …at a slant.  What I know is that the piece isn’t finished.  But what it needs, I’m not sure.  What I trust is, if I pay attention long enough, something will be suggested.

Breath & No Breath began as a painting—and what my intention was there, I can’t remember.  It’s not important.  It didn’t “work”, so I covered it up and moved on, re-working the surface with a layer of yellow and allowing the ghost of the former painting to show through.  That “ghost” is so important; it gives the imagination a way to enter.  Going through a box of  photocopy transfers, I found an image that resonated with the yellow field.  Black and yellow.  The colors used in warning signs.  A suggestion of threat, of possible danger.  This black/yellow combination worked well with the first collaged element, with its feel of a child being “strong-armed”.  Then I screen-printed, twice, the image of a set of lungs, with their root-like capillaries, their visual relationship to plant roots and varieties of sea life.

Next, from the box, I pulled the cut-out shape of a snake.  Snakes are loaded repositories of symbolic multi-leveled meaning.  Primal.  And compositionally, they function as arrows, leading the eye.  I played with its placement, found the area where it felt “right” and adhered it to the paper.  It’s not until now, as I write this, that I see what I wasn’t consciously registering but what must surely have been guiding me:  the curve of the snake is almost a mirror image of the shape the woman’s crooked arm makes.

The silhouette shape in the top right corner was traced from a photo in the Washington Post of an Australian sheep farmer dragging a sheep by its front paws, from a barn that was either burning, or soon to be burning (was the sheep dead? … or resistant?… ) due to wildfires.  Again, there was something about this particular image that struck me as primal, Biblical, sacrificial.  I cut the shape from a page in an old dictionary, the paper spattered with red and green paint.  I realize now that associations between heat and breath (suffocation) were at play here, too, when I added this image, though I’m sure I wasn’t aware of it when I chose it.

All of these steps occurred over an extended period of time.

To say that a piece of art, whether it’s visual or a poem, is “finished”, is, for me, to say that for now it feels formally complete enough, and that together with the sense of it—its content—the work contains enough information that I, as viewer, can find a footing to repeatedly enter it and discover something new.  I think the same active process that goes on in the making, goes on in the looking.  Just in writing this, I’ve uncovered more of what was going on, associatively, when making Breath & No Breath than I’d realized.

2 Responses to Explorations (I): “Breath & No Breath”